ENJOY THEM WITH THE ONES YOU LOVE
In 24/48 hours the excellences will be on your table, to conquer new palates.
> Cured Meats>Rolled Bacon 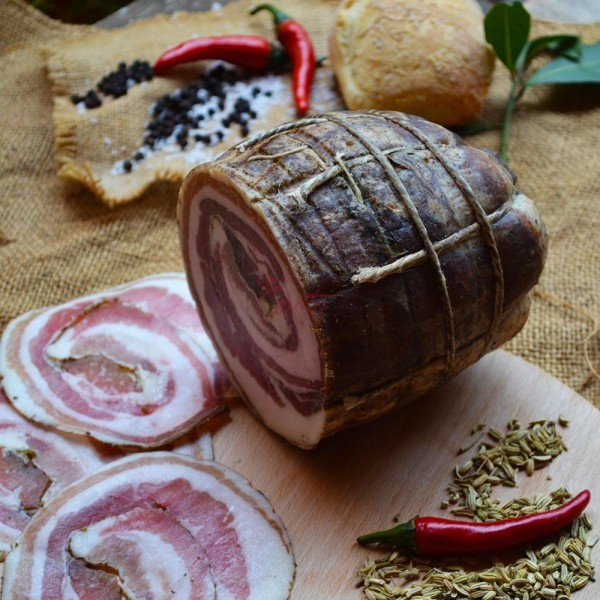 The ancient traditional flavors come alive in this rolled bacon. Flavorful and fragrant, delicate flavor of black pepper and wild fennel, typical of the Mediterranean.

According to tradition, Felitto village was founded by Enotri around the fifth century. B.C. However, there are no historical evidence to support this thesis. Instead the first documents that attested to the life of the settlement are dated around the year 1000 in the form of acts of buying and selling land.

The toponym "Felitto" has several hypotheses of origin. According to Leopardi could come from "Phei-ictus" referred to the abundance of trout fished in the river Calore, the waterway that skirts the rocky ridge where the village stands. A second hypothesis, from Greek, wants the origin of the word from the verb "Phiulatto" (watch, guard, monitor), indicating the shape of the old town perched on the rock, as a guard post easily defended with great visual of the territory. Today, this village of Cilento, is characterized by the spectacle of the "gorges", a splendid example of nature in the National Park, where sports such as hiking and canoeing are praticated.

The food and wine tradition, however, find the maximum expression in the production of sausages and the famous fusilli, made according to ancient traditions handed down from generation to generation. Excellencies from unique flavour only to be enjoyed.

9 other products in the same category: