ENJOY THEM WITH THE ONES YOU LOVE
In 24/48 hours the excellences will be on your table, to conquer new palates.
> Cheeses>Pecorino Carmasciano Cheese 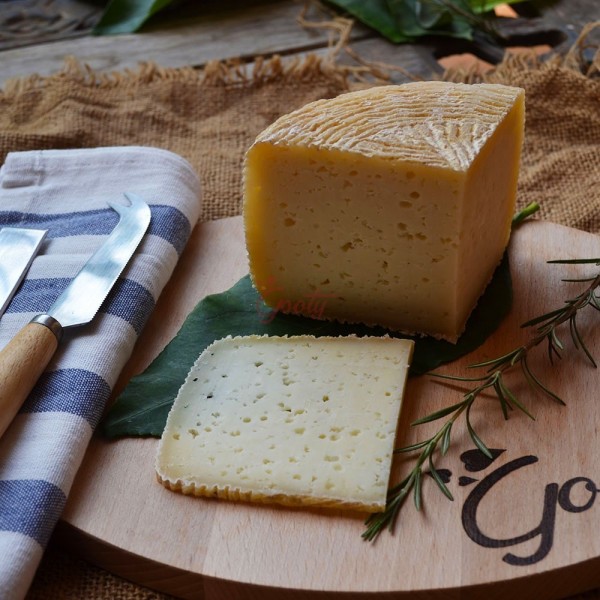 Pecorino Carmasciano cheese is produced in the territory of Upper Irpinia, in Sant'Angelo dei Lombardi on a ground where there is volcanic activity. It is a seasoned cheese with dark rind and straw-coloured pasta, it has a typical taste with hints of milk and grass with an aftertaste that is becoming increasingly piquant with increasing seasoning.

Mefite that is present in the grazing territory of Laticauda sheep makes pecorino Carmasciano unique. The fumes of carbon dioxide and sulfuric acid, typical of volcanic areas, help to form the characteristic piquant flavour of pecorino cheese, besides giving it the yellow colour. The processing cycle is totally artisan. Once the curd is obtained from raw milk and placed in forms of bulrush there is a period of drying, salting and subsequent seasoning, with repeated treatments, through the use of an emulsion of oil and vinegar, in order to promote the creation of a compact dark crust and avoid the formation of mold. Great to be consumed on its own or as an appetizer, exceptional if combined with acacia honey or Montoro Onion jam, accompanied by a red wine Taurasi DOCG or white wine Greco di Tufo DOCG.

“There is a place, at the centre of Italy surrounded by high mountains, famous in every place:

A cheese of ancient origin, linked to the Roman presence in the area of ​​Irpinia. The name Carmasciano represents the production area, that is the district "Carmasciano", between the towns of Rocca San Felice and Guardia dei Lombardi, in the Ansanto valley.

Carmasciano cheese is one of the "cheese under heaven", that is produced exclusively from the milk of grazing animals. It is also closely linked to the territory for the characteristics of the soil. After the victory over the Samnites, the Romans granted these territories to its veterans.

The etymology of the word is a combination of "Camarsius" which means "soldier" and "Anius" that is “bottom". Archaeological excavations carried out in the late eighteenth century demonstrated the presence since the seventh century. B.C. of a deep cult of the goddess Mephitis, identifying the foundations of a temple dedicated to her. The altar is in the Museum of Capodimonte.

The goddess Mephitis, revered also by the Samnites, was connected to areas with volcanic or unhealthy waters, and provided protection for the pastures and fertility.

The Farm D' Apolito of Moscillo Giuseppe is a family business and it is located in Sant'Angelo dei Lombardi , 1 km from Mefite . With passion , dedication and link with the territory it was immediately characterized by high dynamism , motivated by the continuous search for innovation and increase of the quality of production . It covers about 40 hectares of forage and grain for feeding sheep and breeds about 350 head of Lauticada sheep breed . Thanks to Giuseppe and his family Carmasciano cheese continues to tell us his centenary history.