ENJOY THEM WITH THE ONES YOU LOVE
In 24/48 hours the excellences will be on your table, to conquer new palates.
> sweets and bakery products>Torrone croccantino of San Marco dei Cavoti "Il Preferito" 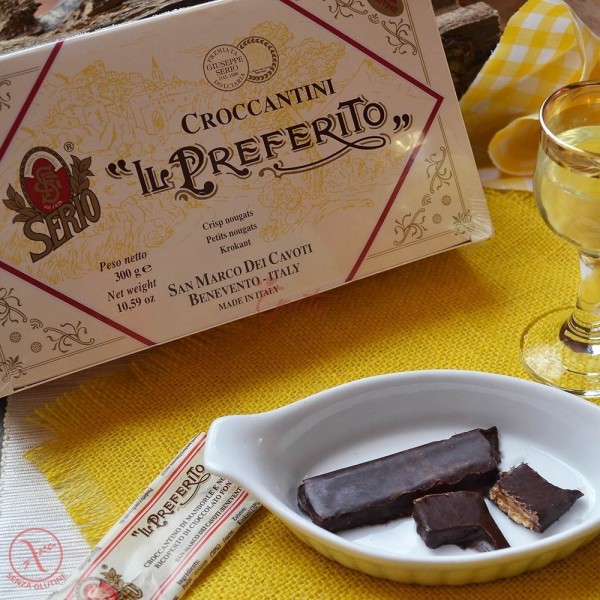 The contrast between almonds , hazelnuts and dark chocolate makes irresistible this excellence, the Croccantini are great to be consumed alone or accompanied by drinks such as coffee , distilled or digestive beverages.

Thirty kilometers from Benevento, between the eastern end of Campania and the board of Puglia, lies the picturesque village of San Marco dei Cavoti. Fertile land with mild climate, was inhabited in pre-Roman times, as it is evident from the oldest part of the village, the district "Zenna". The historical Diodorus Siculus attests the involvement of these people in the Samnite wars, alongside Roma. The settlement was besieged and destroyed by the Samnites, and remained uninhabited for a long time.

The old inhabitants survivors contributed to its revival, in fact they rebuilt a center towards the valley called/ calling it San Severo, then abandoned in the fourteenth century  due to devastating earthquakes.

The work of the feudal lord Luigi di Shabran contributed to the modern town , he strongly wanted the area inhabited, and for this reason did an invitation. A community from Provence, descended with Charles of Anjou from the town of Gap, gave birth to the new center of San Marco, from the name of the main church built on a high ground. From Gap derives the term "Cav" and then Cavoti.

In the late nineteenth century. Cav. Innocent Borrillo invented a product become a symbol of this village: he enclosed in a sweet wrapper with icing sugar and cocoa, a heart of almonds and hazelnuts . Thus was born the Croccantino of San Marco dei Cavoti. The original recipe has undergone several minimal revisions maintaining the high quality of the product and its traditional craftsmanship unchanged, meeting current tastes. As of today, the producers  have multiplied, but the Croccantino can be found only through the medieval streets of this village stuck in time.

The Dolciaria Serio, an ancient and titled company that opened its doors in 1926 , when Saverio Serio opened his first bakery , after learning the techniques of production by master pastry of Benevento . Traditional methods combined with a meticulous selection of raw materials , contributed to the creation of a unique product , giving the village of San Marco the title of home of Campania nougat . The experience and the competence led him to invent a new type of nougat, the Croccantino , today appreciated and widespread as tasty alternative to the classic  Benevento nougat . The company has remained family-owned and the current heirs maintain the absolute will of the founder , but by updating to modern times .