ENJOY THEM WITH THE ONES YOU LOVE
In 24/48 hours the excellences will be on your table, to conquer new palates.
> Patè e preserves>Montoro onion paste 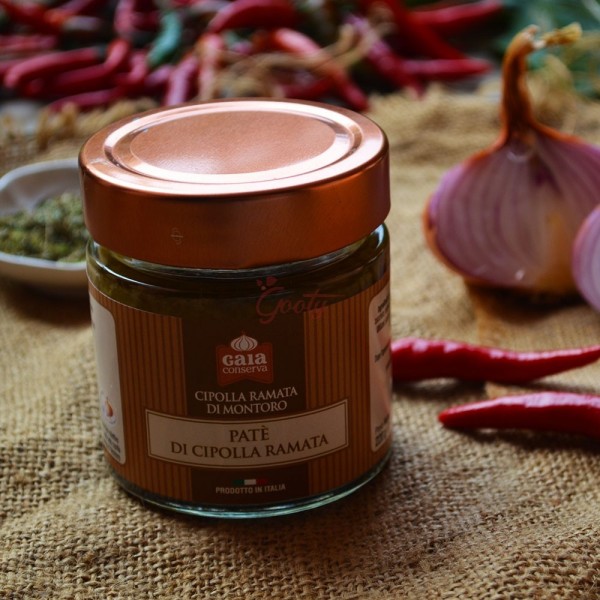 Montoro Onion  has been inserted  by  Slow Food in the Ark of Taste , a catalogue containing the products that belong to the tradition , culture and history of a place , in order to safeguard them from extinction . This paste is made in a traditional way , without thickening agnts , coloring agents and preservatives.

The presence of hot pepper and the sweetness and aroma of Montoro onion make this product ideal for an unusual and tasty appetizer with bread or croutons. It is great to be consumed with pecorino cheese and a drizzle of extra virgin olive oil: simple ingredients to win new palates.

The etymology of the name “Montoro”derives from the fertility of the land, defined by the Latin "Mons Aurus", is that golden mountain. The origin of the settlement, reconstructed through archaeological finds, would be placed in the Paleolithic period. Surely these places hosted the "Abellinates", as evidenced by a plaque of "Abellinum" with header Emperor Cordiano.

It shows that the Roman presence was very strong in the whole territory. The various Latin toponyms  and the remains of monumental works, such as the aqueduct of Montoro, corroborate this thesis. In medieval times there was the peak of importance for the whole territory. Montoro, Lombard feud, was placed in the dense network of Irpinian castles, to control  the vast territory from Avellino to Salerno. The agricultural context has always been the most important economic and subsistence source for settlement. The volcanic soil, rich in nutrients, and the mild breezy climate contributed to the creation of a habitat suitable for crops. Among the many fruits of the earth, Montoro onion has earned a place of honor, still valid today.

This vegetable takes its name from the characteristic and luminous skin similar to the color of copper. In the inner part it has white and purple stripes, an aromatic fragrance and sweet and delicate flavour. Moreover it is indicated particularly in traditional dishes, because its fibrous structure highly resistant to long cooking.

In the heart of Irno Valley  in Montoro , there is the GB Agricola srl,  a firm that with organic production methods , family-run where tradition and innovation combine perfectly . The entire structure is sustainable in harmony with nature , where the mountain ranges of the entire production area and the direct contact with the mild air coming from the sea , combined with fertile soil , have determined the ideal microclimate for the development of several products of excellence . The GB Agricola Srl , also joined the projects " Fattorie didattiche" of  Campania Region and "Agricoltura-Ambiente-Società” of Europe for a dietary education and live healthy.