ENJOY THEM WITH THE ONES YOU LOVE
In 24/48 hours the excellences will be on your table, to conquer new palates.
> Wines>Greco di Tufo D.O.C.G. "Na sera 'e maggio" 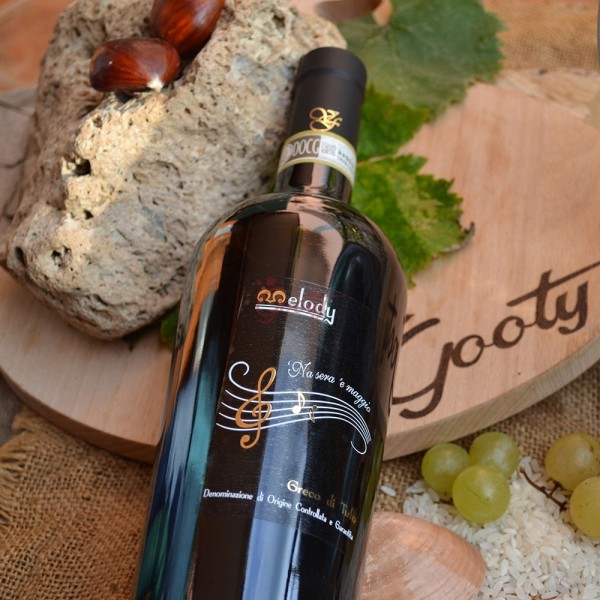 The excellent Greco di Tufo D.O.C.G. is produced near the picturesque village of Tufo, in the particular microclimate of Irpinia on behalf of Azienda Forno, respecting the wine tradition of Campania.

The Greco di Tufo D.O.C.G. is a wine characterized by a straw yellow colour, almost golden and by fruity aroma reminiscent of summer fruits, with shades of apricot, pear and peach. The taste is soft, structured and elegant, with good acidity. The aftertaste brings aromas of fruit, accompanied by notes of bitter almonds. It is excellent with fish and seafood.

“You are really cold, Bice, and iced, if last night not even the Greco wine was able to warm you"

- Fresco in a house of the archaeological ruins of Pompeii

Several archaeological finds, above all Irpinia burials, dated the history of Tufo from the fourth century. B.C. Great attendance is attested throughout the Roman period, but with the advent of the Lombards, in the ninth century. A.D. that the news begin to multiply. The oldest settlement was found along the river Sabato, where at the shadow of Mount Gloria, the locals built the center using the abundant raw materials in the area, the symbol and name of the country: the tufa. Aragons gave the current form of the village, with a number of quantitative and qualitative improvements.

Tufo has both the climatic and land characteristics suitable for the production of one of the best Italian wines: the Greco. The presence of sulfur and particular minerals in the soil, combined with the microclimate, guarantee unique characteristics to the final product. Probably imported from Thessaly by exiles such as Pelasgi, this wine became very important in the Roman courts, so much so that Plinio wrote that the Greco was so precious that it must be served only once during banquets.

“Azienda Vinicola Forno” was founded in 1940. It is located within the beautiful protected area of ​​the Vesuvius National Park where , in a habitat rich in minerals and nutrients due to volcanic activity , it produces the most famous, fragrant and traditional wines of Campania using ancient and natural methods. Here at 200 meters above sea level, the grapes takes on all the organoleptic characteristics that give a unique taste to the Lacryma, making it one of the most popular wines in Italy and abroad.

DOCG is reserved for wines already recognized as DOC (designation of origin) at least from five years that are considered of particular value in relation to their intrinsic characteristics of quality, compared to the average of similar wines. The characteristics of this kind of wine derive from the incidence of traditional, natural , human and historical factors that give the wine fame and commercial development at national and international level.